THE LEGEND OF THE CLANWILLIAM CEDAR 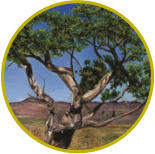 A Scotsman, William Read, sailed from Scotland on the Mayflower in 1821 to create a better life for himself, and his family when they joined him, in the newly settled colony of Port Natal on the south-eastern coast of Africa. Unfortunately, one of the frequent storms that plague the south-western coast caused severe damage to the main mast of the ship and the ship limped into the port of the Dutch Colony in Cape Town. Upon arrival, William only took the time to purchase supplies before he ventured off into the mountains in search of land on which to stake his claim.

After seven weeks of travel in an ox-wagon, William was on the verge of starvation. He had never been particularly good with a gun, so shooting the fast-sprinting game that he came across proved difficult. He had also been constantly climbing higher in the mountains and finding water was starting to become a problem. The abundant streams in the lower regions had become trickles or had disappeared altogether. William still hadn't found suitable land and he was becoming despondent.

After another two days of travelling, William was ravenous, thirsty and beginning to become delirious. He sat down under tree that was growing sturdily out the side of a particularly rough section of rocks and contemplated killing one of his oxen in order to survive. His dilemma was that if he kill one to eat, he would not have enough animals to pull all his worldly possessions those very things he would need once he found his land. But, there were only mountains covered with scrubby bush as far as he could see. His idea of fertile land seemed to be an elusive dream.

Suddenly, there was a shaft of bright sunlight that shot down over the mountain and through a hidden valley. William, excited but sceptical, slithered and slid down the side of the mountain until he reach a narrow winding path that seemed to be carved straight into the mountain. He followed it into a cave and out the other side. And below, to Williams greatest astonishment, was the most amazing valley - filled with fruit trees, streams and dark, rich soil. William fell to his knees and swore an oath to always water the tree that led him here and to fertilize it with the rich earth of the valley.

Many of William's family, and later their family, and after that their friends, came from England and Scotland to the valley that William found until a large settlement was formed. The entire of Clan William eventually lived in the valley and the settlement they formed was named Clanwilliam. And the people there grew plenty of nourishing food and drank the sweet mountain water. And they flourished through the generations.

And, every week, the men of the settlement would take water to the tree, and the women would take buckets of soil, and they would water and fertilize the tree. They named the tree the Clanwilliam Cedar and it still flourishes in the mountains today.

Our company took its name, Cedar, from the Clanwilliam Cedar because of this legend. The legend promotes all the ideals that we instil in our staff strength, durability and longevity. We see you as William; as a person who is industrious and dedicated to securing a better future for yourself and your family. The tree is your contribution towards your benefit. And the valley is your goal through life the perfect place of security and prosperity. We, at Cedar, are the water and the soil. We bring these elements to your contribution through solid investing and hard work in order to protect and grow your benefit. We care about the life you are striving to give yourself and want to help to ensure that you reach the valley.

At Cedar, we believe in nurturing today and protecting tomorrow.

Designed by Dzynhaus [House of Design]